There are lots of resources out there with advice on starting a YouTube channel, however I thought it might be an interesting take to start a series on here following the progress and sharing what I learn during the process.

Just over a month ago I took the leap and started my own YouTube channel.

It's something I've been considering for quite a while, but kept making excuses not to like...

"I'm not comfortable speaking on the mic"

"What if the videos are just crap and nobody watches?"

In the end I gave myself the push I needed and just jumped in. I decided that it won't be perfect, I won't get many views or subscribers and I won't feel comfortable speaking on the mic.

BUT, crucially, I realised that by starting I can improve. I can work on making better videos and over time I hope it will become a channel that is successful.

The best way to learn is by doing, so let's just start doing!

What should I make a channel about?

And so I created the channel, put together some quick visuals for an avatar and header image, and got to work.

To begin with I brainstormed some ideas for content. During my career I've used a lot of different technologies and I could create content on a wide range of topics, but it would make more sense to focus on something specific so the channel has a clear focus (at least initially).

I use Laravel day-to-day these days during my day job, so I settled on creating Laravel content. Whipped out my phone and started listing ideas for Laravel videos I could create.

Before long I had a huge list of ideas, and that was just the initial brain dump - by no means an exhaustive list.

I figured that was a good sign. I shouldn't have any problems coming up with ideas for content!

From the list I created above, I chose something I felt I could explain well and I'd be able to put together enough examples for. That topic was Validation.

I could show some examples of validating a form and then refactoring a form request.

I also had the idea that it didn't just have to be forms you can validate. A few months back I had a requirement for a project I was working on to import some data from a csv file which I knew included some bad data. I'd used the validator when importing these to remove the bad data.

So, I prepped the examples, wrote a "script" of bullet points, and then did the screen recording.

It took way longer than I expected.

While I knew I wouldn't be comfortable speaking on the mic, I didn't anticipate how many mistakes I'd make. Slurring my words and tripping up. Needless to say it took quite a while, and I ended up with around 2 hours of footage.

By the time I edited it down I had around 23 minutes of usable recording, which I ultimately decided to split up into 2 videos.

The first video went live on 19th December 2020, and the second one I managed to get live in between Christmas and New Year on 30th December.

Some advice I've seen multiple times about creating a YouTube channel is to be consistent and have a schedule to stick to. My aim is to post one video a week, and since the first two I've posted three more videos sticking to this schedule.

That said, I do want to be more consistent with this moving forward.

So let's get into the meat and two veg and look at the numbers. During my first month I posted 4 videos, here's the stats from month 1: 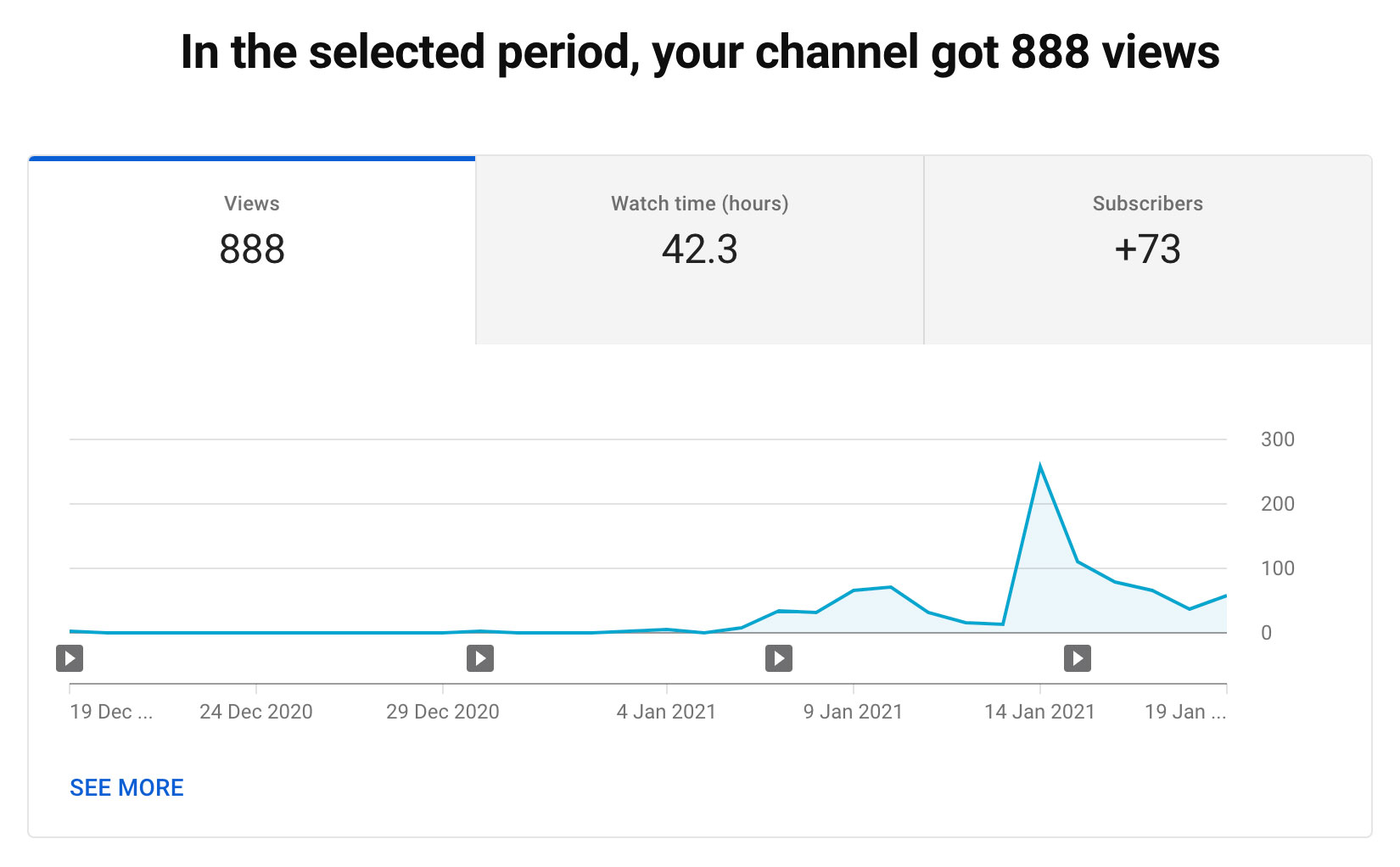 As you can see, I managed to get 888 views in my first month. I have to say this is WAY more than I was expecting!

That said, nothing really happened until 7th Jan when I posted my 3rd video. At this point I decided to start sharing the fact my channel existed online. I did this by posting on social media, and submitting to the Laravel News community links section.

This is where things started moving. The big spike on 14th Jan I posted my 3rd video on the Laravel subreddit which received a few upvotes.

I also gained 73 subscribers during this time which again is so many more than I expected. If you are one of these people thank you!

This means I've been getting 1 subscriber roughly every 12 views on my videos. I'm brand new to this but I wasn't expecting that kind of conversion rate of view to subscriber.

Maybe it's because nearly every viwer isn't a subscriber, so as my subscriber base grows this may shift to a lower rate because a lot of views will be from existing subscribers. It will be interesting to see.

I've learned a huge amount over the last month. First of all you can't rely on being picked up by YouTube's search early on. From my research, one of the most important things for YouTube SEO is average watch time, and I can see that my video with the highest average watch time it is performing better in search than the others. Therefore you need some viewers to make that happen.

I received feedback about one of my videos that the intro was too long and it took around 1 minute to get into the content. It's funny how even when you've done the research and know what not to do, you can somehow become blind to the fact you've done it. Moving forward I'm keeping my intro to a minimum and getting into the content as quick as I can - after all it's why people are watching.

I also learned a bit about editing audio in Adobe Audition. I still don't think it's perfect but there's a noticeable difference between my first video and my latest video, and it's just down to the editing - all the kit is the same.

One of the keys to this process if I'm to continue to grow the channel is constantly looking to improve.

From a video production standpoint, I am looking at the brand itself and getting an animated intro made - something that doesn't take up much time so I can get to the content quickly as I mentioned above.

I also need to be better at sticking to a consistent day and time for my videos to launch. I feel this consistency will help with the channel's growth, and my subscribers will start to get used to when to expect a new video to drop.

Thanks for reading, hopefully you found this article useful. This article is the start of a My YouTube Journey series, which will continue next month. See you then!